Introduction
The presence (or absence) of wheel use in potting and its subsequent spread through the Aegean be analysed by studying the manufacturing process operational sequence (or chaîne opératoire). Forming methods, such as wheel-coiling, leave characteristic traces in the surface topography of the pottery, but these are often difficult to discern with the naked eye – and archaeologists need to be trained in order to do so. The principal aim of this sub-project is therefore to investigate whether algorithms can be used to enhance the recognition of macro-traces on the surface topography of pottery based upon high resolution 3D surface scanning of pottery, and, subsequently assist with the identification of the forming techniques. This project also explores whether it is possible to identify unique markers through 3D technology which can be used to trace the transmission of the potter’s wheel. This sub-project will be the responsibility of Loes Opgenhaffen, forming the core of her PhD research. 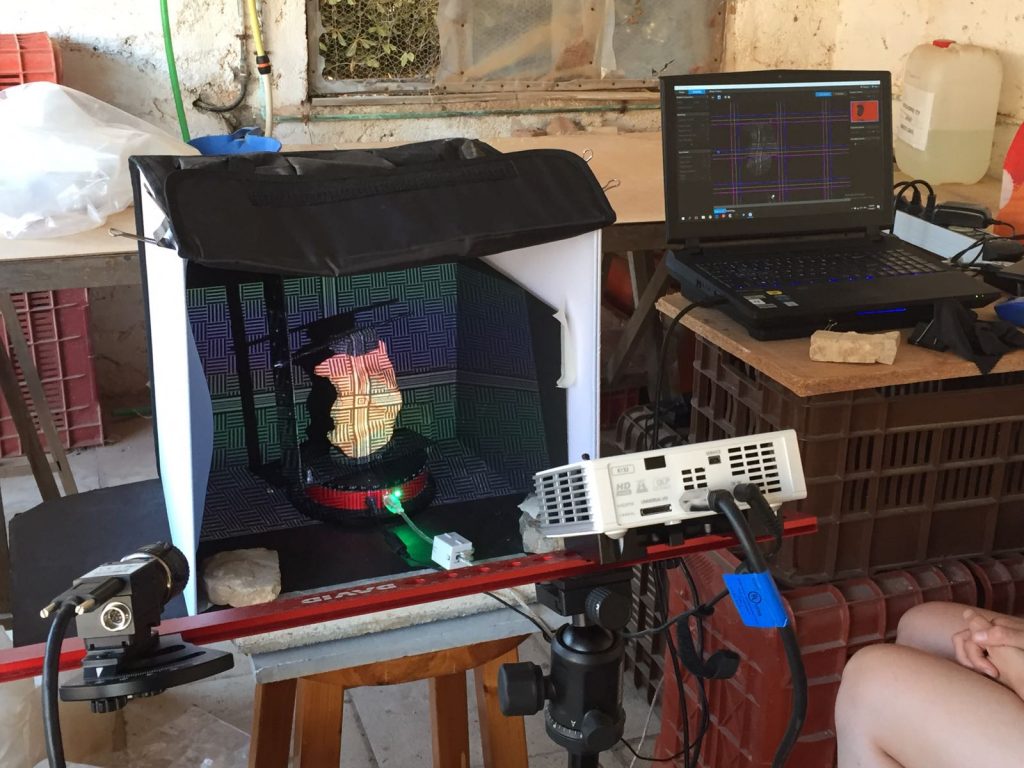 Method
The application of 3D techniques is an integrated research tool for conducting research into the formation of complex societies through technological development and/or change. The development of an online platform providing access to the analytical data, 3D reference collections of the project, will serve as a new arena to communicate research outcomes and results to both scholars and the wider public. As 3D visualisations such as virtual reconstructions and 3D prints are highly attractive to public, the ‘digital’ project explores new ways of engaging the public with ongoing research into ancient forming techniques, including a mobile exhibition and interactive features at heritage events and museums.

Theoretical considerations
When one considers an algorithm as a sequence of actions to be performed in order to solve a problem, some parallels might be tentatively suggested with the chaîne opératoire of pottery production. Of course there will never be a direct analogy, but an analytical relationship may be proposed. The experimental component of Tracing the Potter’s Wheel addresses the range of possible techniques of pottery production. Close collaboration between experimental and digital archaeologists on the project will allow for the digital mapping of not only the the broader details of chaînes opératoires in experimental pottery production, but also the conscious and unconscious actions and gestures undertaken.

Actions taken and decisions made by archaeologists shape their datasets. The awareness of the agency of archaeologists in the creation of archaeological data is key to the translation of the archaeological process of reconstructing pottery in the digital domain; the algorithm is in this respect the analytical process that leads to the reconstruction of ancient potting techniques. This reflective approach to archaeology, together with the chaîne opératoire approach, is central in the digital component of the Tracing the Potter’s Wheel project.