Clays are the weathering products of parent rocks but they can form under very different conditions in the environment; for example, at the bottom of the sea, in a river bed or at the base of a mountain, etc. These different environments and different parent rocks create very different compositional and textural characteristics for clays used in the potting process. Archaeologists use these differences to identify local ceramic production by matching the geological and compositional compatibility of pots with the sites in which they were found. If no compatibility exists, geologically speaking, then it is likely that the vessel was imported as a finished product to that location. 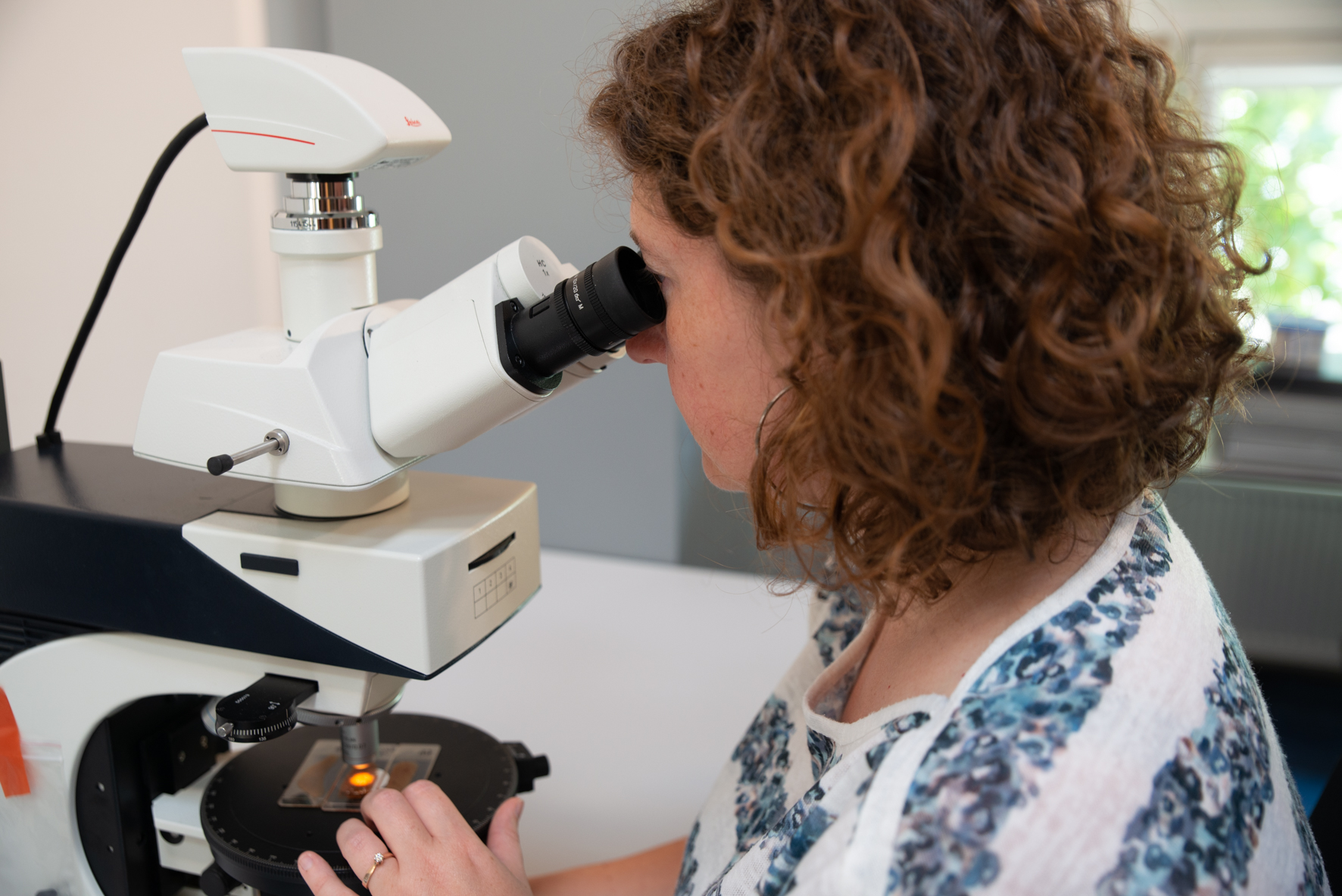 Jill examining a ceramic thin section using a polarizing microscope in order to understand the raw materials used to make the original ceramic.

Ceramic petrography is carried out using a polarizing microscope to examine extremely thin slices of ceramic vessels (only 30μm or 0.003mm, hence thin section) which have been mounted onto a glass slide. At this ‘thinness’, light is able to pass through the crystalline structures of most minerals and rocks (mineral aggregates) and produce distinctive colours and patterns that enable their identification. Thin sections are analysed at 25 to 200 times magnification, otherwise we would not be able to distinguish the individual colours and patterns of the tiny inclusions. They are usually placed on a rotating stage above a transmitted light source. 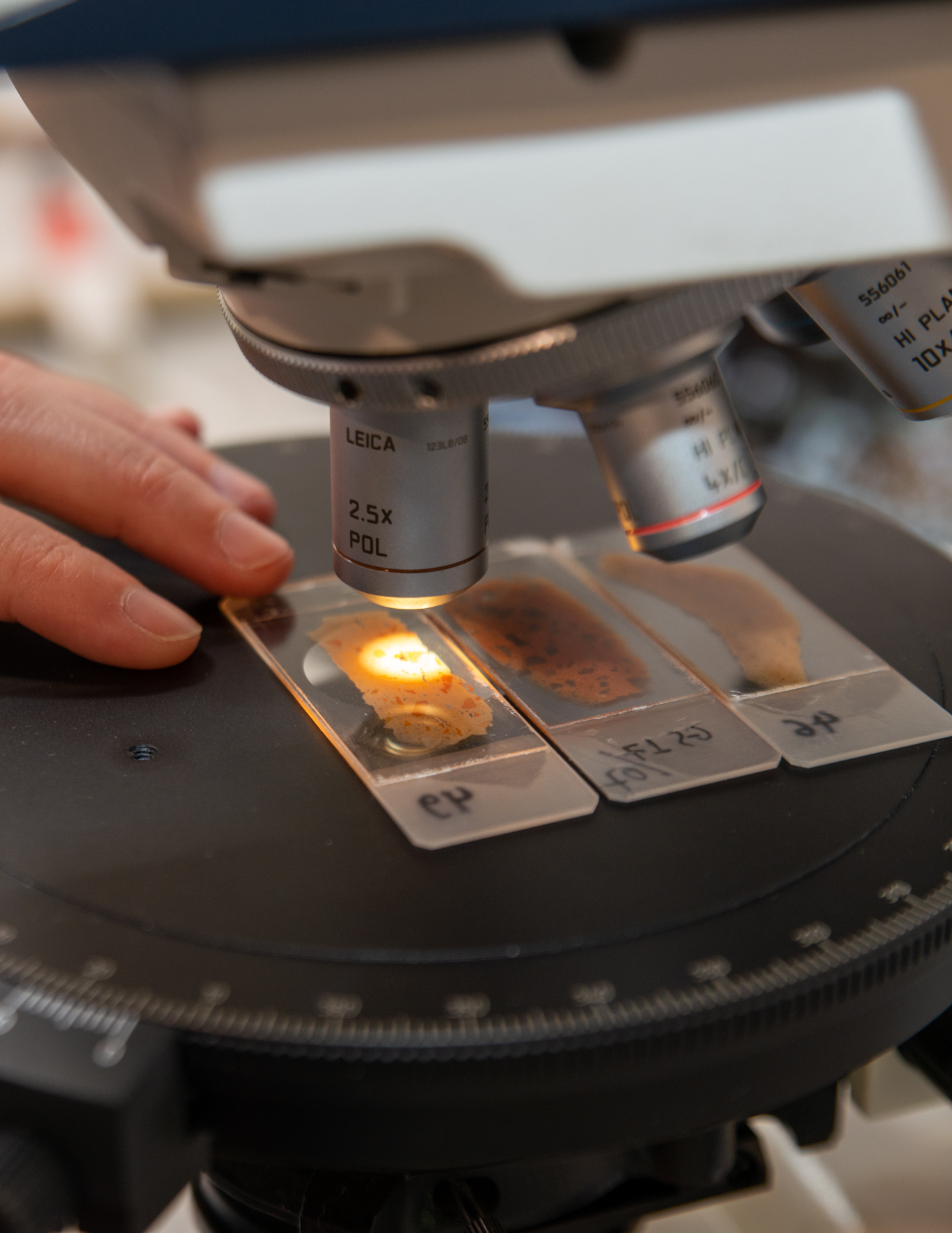 Placing a ceramic thin section on the rotating stage of a polarizing microscope.

Polarization plates are used to restrict the direction of light waves, with just one plate producing PLANE POLARIZED LIGHT (PPL) and a second, the ‘analyser’, placed perpendicularly to the first creating CROSS POLARIZED LIGHT (XPL). Glass is an ISOTROPIC material meaning that it allows light to pass uniformly through. When light passes through the glass of the mounting slide, it appears white in plane polarized light because all light is transmitted, but black in cross polarized light, as the 90° angle difference between the planes prevents the light from being transmitted to the eyepiece.

So why do we see such vibrant colours and patterns when looking at ceramic thin sections? The tiny particles of minerals and rocks that clay consists of are mostly ANISOTROPIC, their internal crystalline structures alter the light passing through according to their own structural properties and therefore allow some light to be seen through the analyser.

The images below show plane polarized light views (white voids revealing the glass of the slide) and cross polarized views (voids are now black due to no transmitted light).

Volcanic rocks are identifiable in thin section due to their distinctive textures. These rocks are either high in silica and very glassy (so usually mostly isotropic) or contain extremely small mineral crystals from their rapid cooling after ejection. A piece of volcanic rock is visible in the images below. 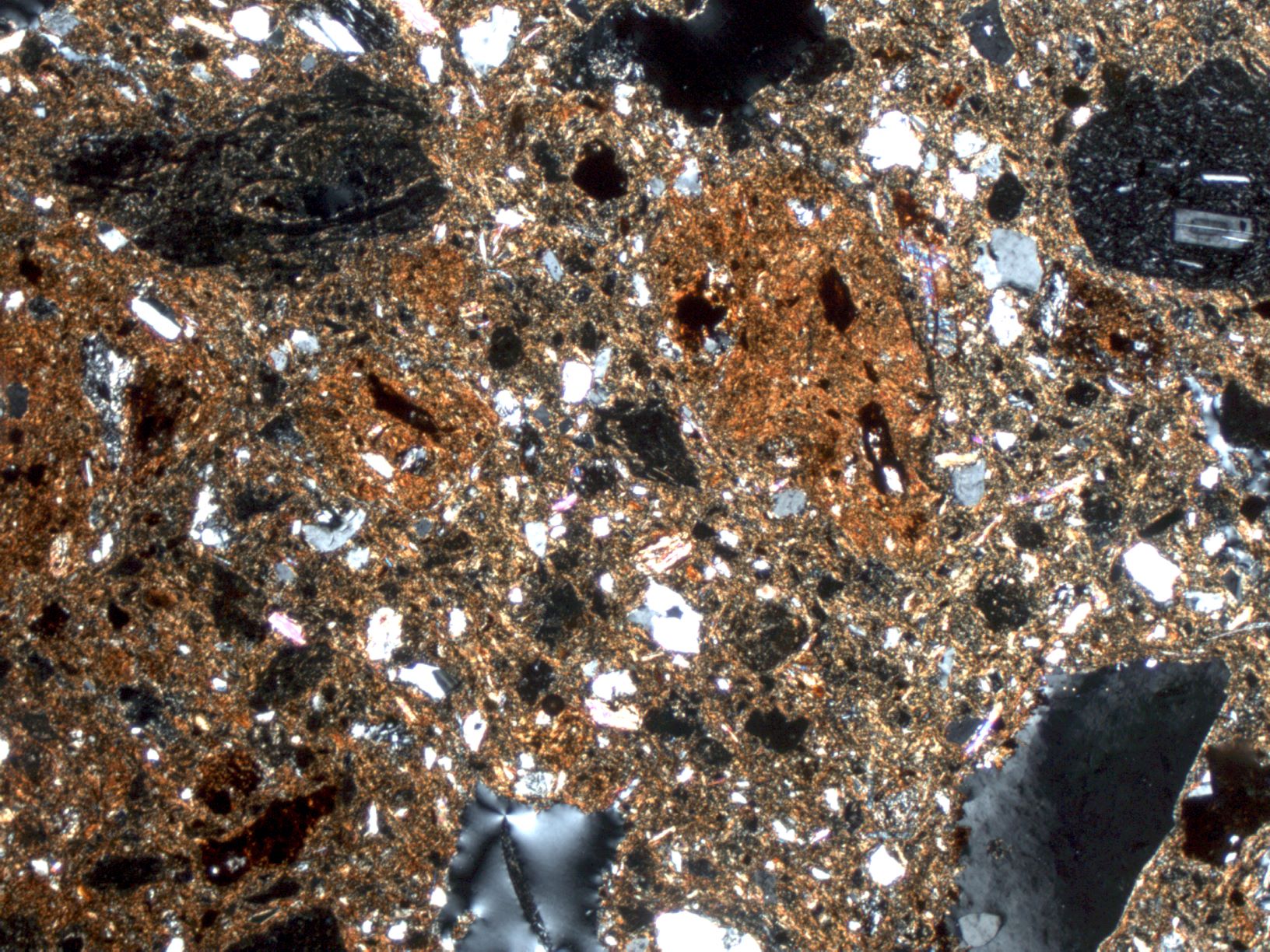 It is composed predominantly of small, needle-like or microlytic feldspar crystals (black and white) with a small area of iron oxide (isotropic, black in both PPL and XPL) and a tiny amphibole (hornblende?) crystal that appears pale brown in PPL and orange-green in XPL. Elsewhere in the fabric, larger feldspar crystals are visible (with black and white stripes and internal zones or rings), smaller fragments of the microlytic volcanic rocks, as well as occasional voids or air pockets and darker iron oxide grains.

In another photomicrograph, a calcareous ceramic fabric is visible, showing a paler yellow colour and presenting a small shell trapped in the clay. The walls of the shell are calcite, a stable crystalline form of limestone or calcium carbonate, but the interior voids have filled with a calcite-bearing clay which appears darker in colour. Other even smaller biological forms can be seen to the right of view (probably foraminifera also composed of calcite) which suggests that this clay originally formed in a marine environment, before solidifying and being exploited many thousands of years later by potters. 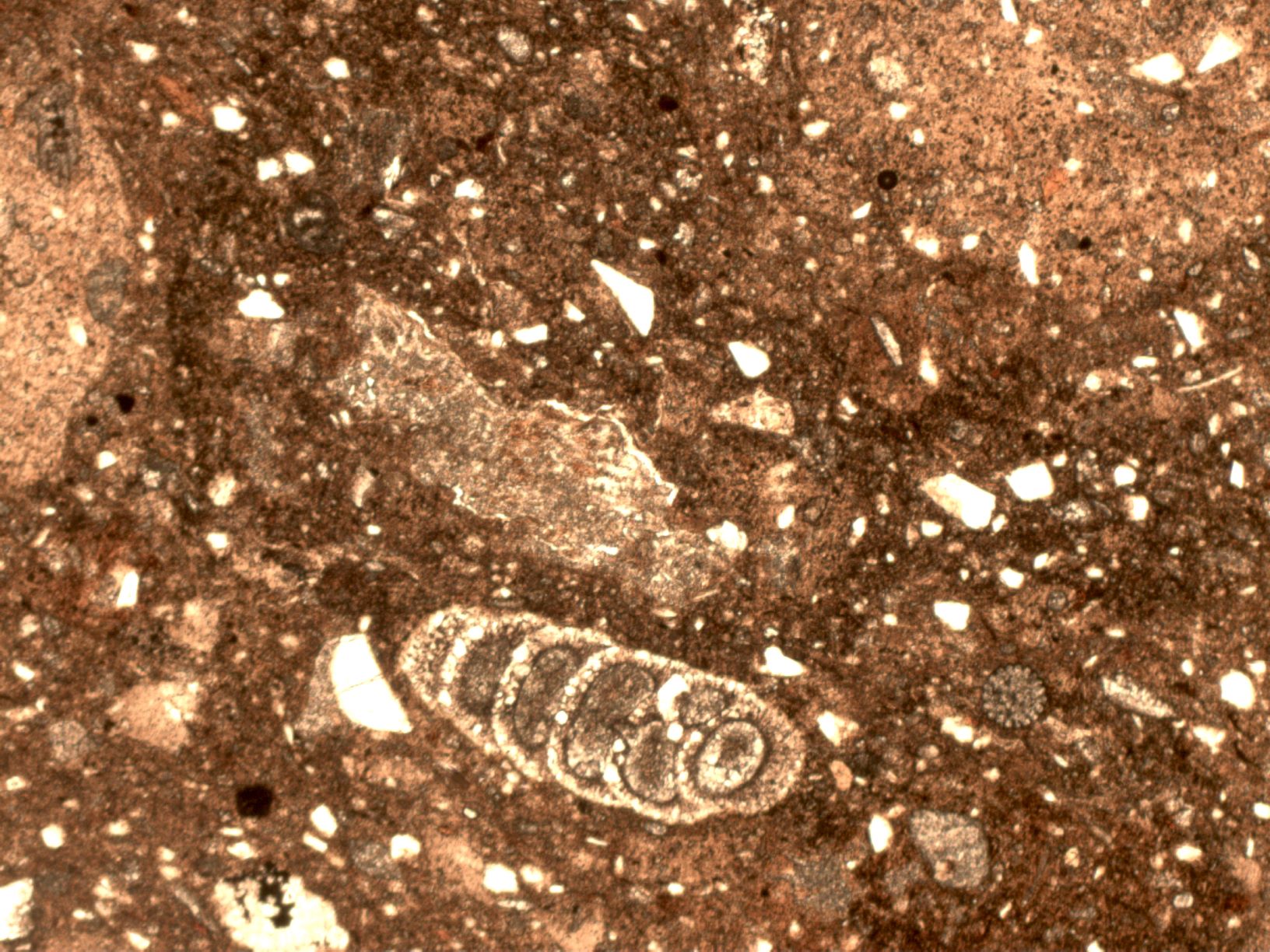