Wheel coiling is the name for a combination technique which involves some coil potting actions and some wheel potting actions. There’s a growing body of research which shows that potters in societies started using this technique during a time when the pottery wheel was a newly-developed innovation. The figure shown here comes from one of the best-known publications within this research, and it shows four different ways of combining coil potting and wheel potting: Methods 1-4. 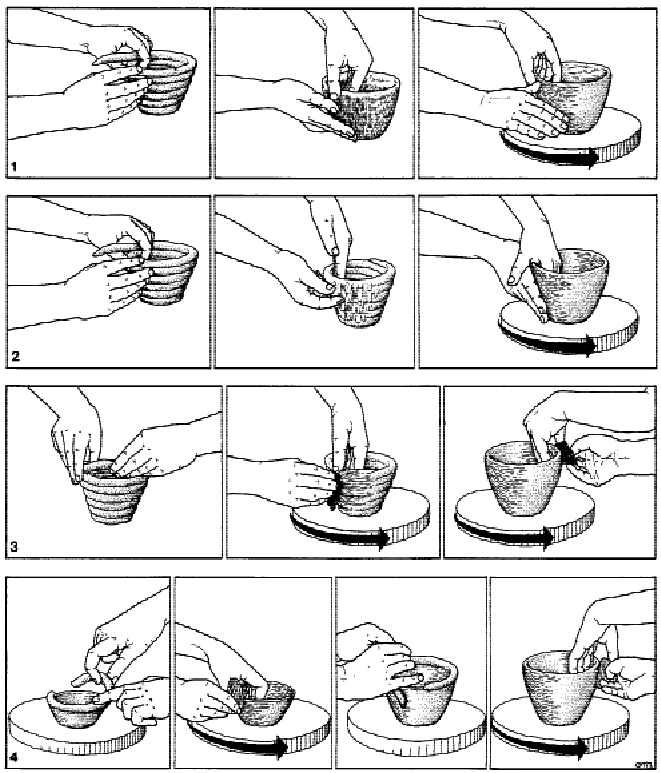 It’s a technique which can be seen today too – potters use wheel coiling to create pithoi in Thrapsano, Crete. The premise is that clay is rolled into coils and attached to one another successively to add to the height of the vessel walls. These are thinned and shaped while the wheel is rotating – it might be that one coil at a time is thinned and shaped as in the Thrapsano video shown here:

The Thrapsano method that the video showcases is known as Method 4, where the potter alternates between coiling actions and rotation actions to form the whole pot. Alternatively, the potter may thin and shape all of the coils at once to complete the whole vessel in two phases, which is the strategy described in Methods 1-3. Caroline has been exploring some of the different ways that a potter can use Method 3 by attaching her coils together either by stacking or with wedging.

In this first video, the coils to make the wall height are stacked one on top of the other, and before the wheel starts spinning there are many coil seams visible on the inner and outer faces of the cup’s walls. After the walls are thinned and shaped, there are very different traces visible, but we might predict here that coil seams might still be visible on parts of the inner faces and the outer faces.

In the second video, Caroline uses the wedged coil technique to join them together. Each new coil of clay is stuck to the inner face of the wall but just below the top. Then she makes something like a rolling gesture to attach everything together – the coil is pressed downward and into the wall and at the same time the outside of the pot is pulled up to make the wall taller. Like with the stacked coils, this little cup has many coil seams on the inside before the wheel starts spinning for thinning and shaping. Unlike the stacked coils, the wedged coils leave no coil seams on the outer surface. So we probably shouldn’t expect to see coil seams on the outside of a wheel-coil pot if the potter used wedged coils.
There are differences in the kinds of traces that we see which depend on the kind of wheel-coiling that a potter practiced, but that is a topic for another space. For here, the take home message is that wheel-coiling is a way of making pots that uses coiled clay and wheel rotation in order to make a pot.