There are many basic ways to make a pot – if you’re curious about the way that we describe potting techniques, have a look at this first image. It’s a very simple summary of how clay is shaped into a pot for firing. The different techniques shown there include: 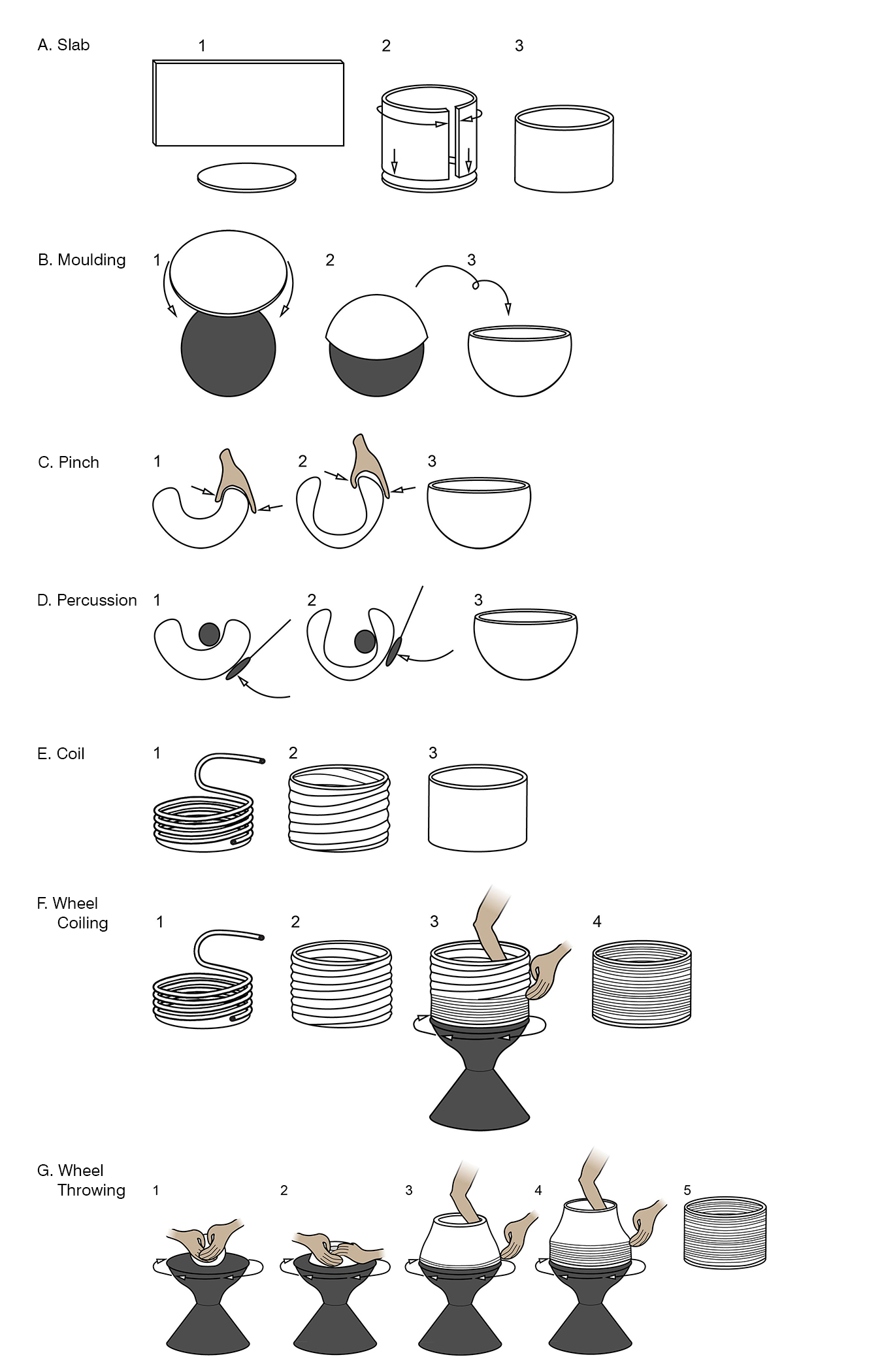 A. Slab, where clay is flattened into a sheet (1), curved into the shape of vessel components (2) and seams are smoothed after joining (3)

B. Molding, where a mass of clay is deformed over a large, stationary shape (1), given a uniform thickness (2), and then removed from the mold and smoothed (3)

C. Pinch, where a mass of clay is pinched repeatedly between fingers and thumbs of both hands to create a void (1), then base and upper wall and rim thicknesses are finished (2), and then smoothed to give final shape (3)

D. Percussion, which is similar to pinching in actions, though the mass of clay is shaped using a percussive action. A stationary object is held inside the mass of clay and a tool like a paddle is used to strike the outside to open the mass of clay (1), thin and shape the walls (2), before the vessel is finished (3)

E. Coil, where clay is rolled into long thin cords of clay and stacked in rings or spirals (1) and then attached to one another (2) and finally smoothed together (3)

F. Wheel-coiling, where coils of clay are stacked (1) and joined (2), before being smoothed and shaped using rotation from a pottery wheel (3) to create a finished volume (4)

G. Wheel throwing, where a mass of clay is centered on a rotating pottery wheel (1), and given a central void (2), before the walls are drawn upward (3) and outward (4) to create a finished volume (5)

Regardless of which technique a potter uses, they will be able to form functional and beautiful (or not so beautiful!) ceramics, because no technique is ‘better’ than another – the differences we see in the techniques that a potter uses are based on aspects of who they are like their culture, their preferences, and their education. This allows us to say that when people from different villages (or archaeological sites) have similar ways of making their pottery, then perhaps they also had similar cultures, preferences, or that they learned from each other.

Things get even more interesting when potters combine two or more of these basic actions together (like wheel-coiling). The ways that basic actions are combined is a fruitful way to start to explore the difficult-to-see differences and similarities between potters.

Why is this relevant for Tracing the Potter’s Wheel? We look carefully at the way that potters started using the pottery wheel across the Aegean. When a new technology – especially one which changes the techniques that people use – spreads across a region, it makes us think that people were learning from each other. Through finding the places where people used the same new techniques using the pottery wheel, we can start to talk about the network of people who trusted one another and learned from one another.